A Disappointment with My New Organ Clone

I’ve had my Viscount Legend Live for over nine months now, and a couple of months back I discovered a problem with it that I feel like I need to share because my blog posts here about the Legend Live have been getting quite a bit of traffic from people looking for which clone they should consider buying.

I still give the Legend Live a positive recommendation, but not with the enthusiasm I had for it before. Some players will not notice the problem I’m going to discuss, but if you play the whole instrument including pedals, and particularly if you play jazz walking bass using the pedals and the manuals together like I do, you probably will notice this annoyance.

On a real Hammond organ, there are two kinds of tonewheels: normal ones, which the manuals use, and “complex” ones, which the pedals use (the pedals also use some normal ones, but that doesn’t concern us here). The normal tonewheels are intended to produce as close to a sine wave as was practical when the organ was designed and built, while the complex ones intentionally include some higher harmonics to enrich the pedal sound without having to provide more than two pedal drawbars on the console. The harmonics built into complex tonewheels can have the same frequencies as the tones sounded by normal tonewheels, and this means that a note played on the pedals can either reinforce or cancel out a note played on the manuals if they have one or more of these harmonics in common.

The mechanical linkage through gears in the tone generator locks the tonewheels in a fixed relationship with each other while the organ is running, unless a mechanical obstruction limits the ability of one or more tonewheels to move, which means the organ is not working correctly. On every Hammond I’ve played, playing the same note on manuals and pedals at the same time makes the note louder, and makes it louder by a consistent amount. Given the ability of the tonewheel driven gears to slip on their shafts, I’m not sure why that positive reinforcement is so consistent from one organ to the next, but it is what I observe. It seems like the wheels are always set somehow so all the interference among common harmonics was constructive. This is just what you’d want as a player, it seems to me: more notes gives you more sound.

The problem with the Viscount Legend series is that it seems they don’t have that fixed phase relationship that real Hammond tone generators provide. As a result if you play a bass line simultaneously on the manual and on the pedals — which we often do in jazz to reinforce or accent a few notes in a row by making them louder — you don’t get consistently louder volume of the notes. Instead you get somewhat random volumes because sometimes the pedal and the manual notes reinforce each other, and other times they partly cancel out.

I made a quick video demonstrating the problem; it’s pretty hacky and the phone’s dynamic range compression makes it harder to hear the issue than it would be in person, but here it is.

Several weeks ago I communicated this issue to the folks at Viscount; they have acknowledged seeing my video, but I’ve gotten no read on what priority this problem has for them. It’s been quite some time now since their last OS revision (1.6) came out, so I’m not sure when or even whether they intend to ship another one, unfortunately.

So if you’re considering a Legend-series clone from Viscount, you should know that you might be saddled permanently with this problem. For players who don’t use pedals it won’t be an issue, but if you play the whole instrument, I predict you’ll notice this problem at some point. The Nord C2D definitely did not have this issue.

An experienced technician and player on a Facebook group where I linked to this post challenged me on my statement that the tonewheels in a real Hammond don’t change in phase so I investigated the issue in more detail to demonstrate exactly what I mean and to further test my hypothesis about what’s going on.

I recorded several tests of my A-100 and my Legend Live in Pro Tools and then used multiple assessments to confirm that the issue is as I thought: It’s as if when you play each note on the Legend Live, the formerly silent tonewheels for that note start “from scratch.” It’s as if the tonewheels are normally stopped in the Legend Live and they instantly spring into full-speed spinning life from a fixed rest position when a note needs them.

There are lots of ways to illustrate the situation using the tests I did, but the image here is perhaps the easiest to understand: 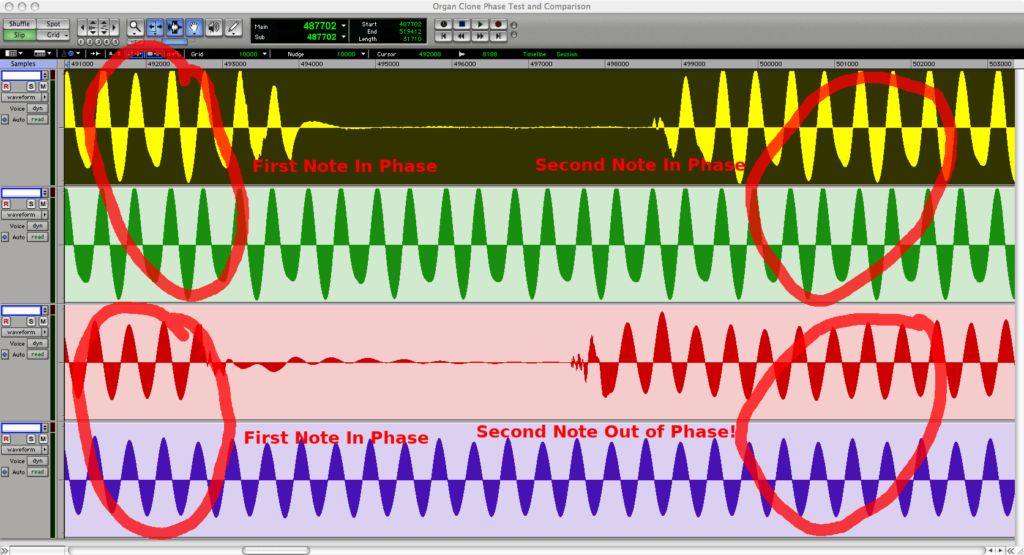 Click on that image for the full-size version if it isn’t easy to see. Here is what the image shows:

The upper two waveforms (in yellow / brown and in green) show notes played on my A-100.

The lower two waveforms (in red and in blue) show notes played on my Legend Live.

In each pair of waveforms, the upper wave shows the end of one note and the beginning of the next note.

In each pair of waveforms, the lower wave shows a single long, sustained note that we use as a phase reference for the shorter notes.

Nothing is edited. The long notes are nudged in time so that their phase lines up with the first of the corresponding short notes. So on the left side of the image, each long note is pretty accurately in phase with the short note just above it.

Notice that the second short note on the A-100 (topmost waveform) is also accurately in phase with the long A-100 note (second from the top).

Now notice that the second short note on the Legend Live (second waveform from the bottom) is almost exactly out of phase with the long Legend Live note (bottom waveform). That’s the illustration of the problem.

In that same Pro Tools session if I zoom out, farther to the right I see a third short note played on each instrument as well, and again on the A-100 it’s perfectly in phase with the long reference note, and on the Legend Live the phase relationship lies in between the completely in-phase example and the completely out-of-phase example that this zoomed-in image shows. To see the phase relationships clearly, I simply had to forgo showing some of the possibilities. The upshot is that the phase relationship against the long reference note on the Legend Live is essentially random: Logically, the “tonewheel phase clock” seems to restart each time I play the note, whereas on the Hammond, the tonewheels are spinning all the time at the correct speed, no matter whether a note is being played or not.